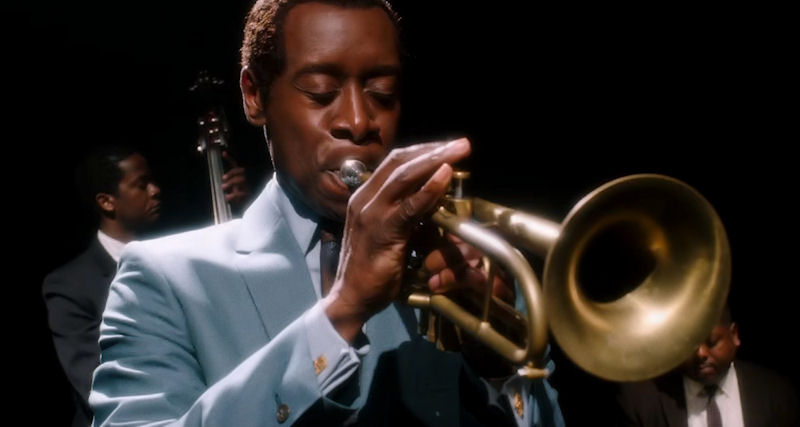 “Get the fuck off me, Hitler”

Don Cheadle’s gaudy, prismatic passion-project biopic Miles Ahead just had its world premiere. It was the closing night film of the New York Film Festival and it is very much an anti-thesis to Marc Abraham’s recent I Saw the Light. The contrast is dramatic. Where I Saw the Light is dull, Miles Ahead sparkles.

Miles Ahead is much more than a SparkNotes version of a musician’s life. Instead, the film captures icon Miles Davis memorably using a unique framing device, intercutting between Davis as the narcotized, trigger-happy recluse sitting at rock bottom contemplating a comeback and Miles Davis in his prime reflecting upon the places where he may have made mistakes. The clever dual-narration exposes the audience to both sides of a jazz great through persistent memories and artful flashbacks.

Miles Ahead is a sobering, frantic fantasia. Its many flashbacks delight the senses and show how creative and vital an artist Davis was even in the midst of his darkest hours. If the film has a weakness it is that its non-flashback sequences sacrifice raw intensity for slickness. Nevertheless, Miles Ahead gives viewers a vibrant, funny slice-of-life look at the jazz virtuoso. Possibly taking some inspiration from his Cheadle’s work in Boogie Nights, he succeeds in capturing the kitschy zeitgeist of 1970’s.

Cheadle takes an unconventional route in exploring Davis’s early life. Rather than focus on the origins of Davis’s attraction to the trumpet and to jazz, Cheadle chooses to focus on Miles Davis as a person and the ways he coped with achieving fame while his personal life disintegrated.

As co-writer, director, and star, Cheadle has made a film with grand ambitions to capture a life that includes the drama of car chases, shootouts, and drug deals. The reality of a life that many of Davis’s fans might have imagined in an idealized way is laid out for all to see. Davis is haunted by his actions in his previous romance by his abused and battered first-wife, Frances (played by Emayatzy Corinealdi). He struggles to be a faithful husband, to hang on to a dissolving marriage, to cope with addictions, to control a violent temper, and to deal with dishonest producers in his musical career.

While these flashbacks explain the many regrets of Davis, I found the more contemporary material about Davis and Rolling Stone writer Dave Brill (Ewan McGregor) to be among the best parts of the film. McGregor and Cheadle liven up the screen. Believing that executives at Columbia Records have double-crossed him, Davis (Don Cheadle) confronts a corrupt record producer (Michael Stuhlbarg), his bodyguard, and an up-and-coming trumpet player played by Short Term 12’s Keith Stanfield.

Fortunately, for fans of Davis, Cheadle naturally captures the spirit of the jazz great without coming off as an imitation. His is a wonderfully nuanced, surprisingly subdued performance that captures both the wild, erratic outlaw who cannot right himself and the ambitious musician determined to reach the top of the jazz world.

Moviegoers who want to see Don Cheadle’s Miles Davis perform on screen are going to be disappointed. Except for a few scenes and the finale, the film does not offer up the goods in this regard. The soundtrack, however, is excellent and contains some of Davis’s best music. Even though this is his first time directing, Cheadle makes some smart and bold decisions. He makes excellent use of rapid cutting, audio-cuts, visual present-past interplay, freeze frames, inventive transitional cuts, and unconventional shots including, at one point, literally pushing the camera across the screen.

My one serious gripe about the film is that the finale does not work. The finale is just a little too slick. It comes off like a bad mixture of a concert movie and the visual elements of the prologue to Spike Lee’s Do the Right Thing.

Despite its flawed finale, however, Miles Ahead is still one of the most entertaining biopics of this year. It should be must-see material for those wishing to know Miles Davis and to understand his struggles on the way to musical greatness.